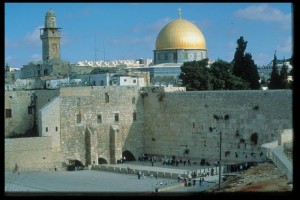 Israel is a land and a people. The history of the Jewish people, and of its roots in the Land of Israel, spans some 35 centuries. In this land, its cultural, national and religious identity was formed; here, its physical presence has been maintained unbroken throughout the centuries, even after the majority was forced into exile. With the establishment of the State of Israel in 1948, Jewish independence, lost 2,000 years earlier, was renewed.

Jerusalem the golden is like no other city on earth. Sacred to the world’s three major monotheistic religions, and was fought over for three millennium by a variety of peoples and nations. Jerusalem is the capital of Israel and some may say the center of the world.

Geography – Long and narrow in shape, the country is about 290 miles (470 km.) in length and 85 miles (135 km.) in width at its widest point. Although small in size, Israel encompasses the varied topographical features of an entire continent, ranging from forested highlands and fertile green valleys to mountainous deserts and from the coastal plain to the semitropical Jordan Valley and the Dead Sea, the lowest point on earth. Approximately half of the country’s land area is semi-arid.

Spring & Summer (April- September): Jerusalem is warm/hot and sunny. It usually doesn’t rain during this time of the year anywhere in Israel. Evenings are normally warm but can get chilly at times.

Fall & Winter (October- March): Jerusalem gets much colder and rainy, but there are still many sunny days. There are a few very rare and special days a year when the city gets covered in a white and pure blanket of snow.

Time – Israel is two hours ahead of Greenwich Mean Time.

There are ATM machines all over Israel, compatible with the Maestro, Cirrus, NYCE, Mastercard, VISA, American Express and other cards you use at home. You insert your card, enter your PIN and receive Shekels debited to your account, converted to dollars. You can also exchange money and travelers’ checks at banks or authorized exchange points.

Due to the dynamic nature of the currency markets, we suggest that you check the current rates on the internet.

Israel assesses a Value Added Tax (VAT) of 16.5% on goods and services. Prices should include this tax. For purchases over $50, you can request the store clerk to fill out a form so you can get a refund of the tax at the airport before you leave.

The water is safe to drink throughout Israel (though it may take you a day or two to get used to the different minerals in the water), and Israel’s fresh fruits and vegetables are good. Bottled water is available everywhere too. Kosher food means no mixing of meat and milk products either in food preparation or in serving, and no pork or shellfish. These Jewish dietary rules are observed by most hotels and many restaurants throughout the country.

Israel’s voltage is 220 volts, like Europe. Our electricity outlets usually confirm to European adapters, but electrical stores can easily supply you with the right adapter if necessary.

Telephone – Each DVI apartment has a land-line phone for local calls. Public telephones are operated by telecard, available at major hotels, post offices and many kiosks. It is also possible to purchase pay-as-you-go SIM cards to use in GSM compatible cellphones – available from post offices, authorized sellers including Superpharm and many kiosks.

In Jerusalem, the bus company Egged runs on weekdays from before 06:00 a.m. till midnight, on Fridays till about two hours before sunset and on Saturdays from after nightfall. In order to ride the buses, you must have a smart card called a Rav Kav.

You can get a Rav-Kav, and load it, at the Rav-Kav service center in the arrivals hall at the airport, open Sunday-Thursday 07:00 to 23:00; Friday 07:00 to 15:00. There are also Rav-Kav service centers around the country. If you ask Sharon on your first day of volunteering, she will help you get one near the clinic. The Rav Kav can be used on buses and the light rail in Jerusalem. The initial cost of the card is 5 shekels and rides cost approximately 6 shekels each. There are free transfers between lines for up to 90 minutes.

There is a Bus to Ben Gurion Airport every 30 minutes. There is also a train to the airport near the Jerusalem Central bus station. The train does not run on Friday or Saturday. The Central Bus Station is located near the main entrance to the city on Jaffa Rd. Tel. 530 4883

The new Light Rail runs from Pisgat Ze’ev, past Ramat Eshkol and the old city, the central bus station and Kiryat Moshe to Mount Herzl and the Yad Vashem museum. Tickets are the same price as the bus, and transfer tickets are transferable between the bus and the light rail, and vice versa.

All taxi fares are governed by a meter, which operates according to Tariff I from 05:30 to 20:59 and Tariff II from 21:00 to 05:29. When starting a journey, the driver is obligated by law to activate the meter.  At your request, the driver must give you an official receipt printed by his electronic meter.  Intercity fares have fixed rates and can be quoted in advance. In the event that you wish to lodge a complaint regarding traveling by taxi, please contact the nearest Tourist Information Office (in Jerusalem: Jaffa Gate Tel.  628-0457 or 17 Jaffa Road  Tel. 625-8844 or the Ministry of Transport, POB 867, Jerusalem 91008.

Sherut (shared) Taxi – These shuttle taxis usually carry 7-10 passengers and follow fixed inter-city routes and fares; they often run on Jewish holidays, such as Shabbat, when the buses don’t run.

Nesher offers 24 hour shared taxi service to and from Ben Gurion AirportIf you wish to use Nesher from the airport to your apartment upon arrival, simply walk out to the taxi area, Nesher Super Shuttles are always waiting there to collect passengers. (60-65 NIS per passenger).

Also, they will pick you up from your apartment or hotel and take you to the airport.  Pick-up must be booked 24 hours in advance. Call 02-625-7227 or walk in to the office at 21 King George Street.

Please keep in mind that this is a shared taxi with up to 10 other people, so you may be in for a long ride. Also, make sure to confirm the price with the driver BEFORE boarding the van.

Within the Jerusalem Police Force is a special unit, the Jerusalem Tourist Police, which deals exclusively with tourists and their problems. The unit’s top priority is the welfare of tourists, especially those who lose their way, or have been pick pocketed or swindled or have lost their cars during their stay in the capital.  Anyone in need of its service can dial 100 and receive immediate assistance.